This post is about my contribution to the HPX Concurrency and Parallelism library, for GSoC 2022.

This summer, I joined Ste||ar Group (based in Louisiana State University) as a contributor through Google Summer of Code (GSoC). I contributed to the HPX project, which is a C++ Standard Library for Concurrency and Parallelism.
My project? HPX Algorithm Performance Analysis & Optimization

My mentors were Giannis Gonidelis and Hartmut Kaiser.

Use of profiling tools

Our work wasn’t a simple feature implementation but rather more exploratory in nature. Here are a few examples of the processes we developed, in order to discover areas of improvement:

Above are two fundamental visualizations: Speedup Graph and Strong Scaling.

For all performance metrics, it’s crucial to take a lot of samples, then take the average (see next section). A single measurement will not be accurate!

Speedup Graph
The Speedup Graph shows the speedup (duh!) of our parallel (“par”) implementations compared to the sequential one (“seq”). For a constant workload, speedup is defined as follows:

Strong Scaling
The Strong Scaling graph shows us how speedup scales when we throw in more cores, for a constant workload.
Ideally, speedup would increase proportionally to the number of cores (for example, 20 cores -> speedup of 20). This is however never the case, due to parallelization overhead, inefficiencies, and additional work that a parallel implementation may require. 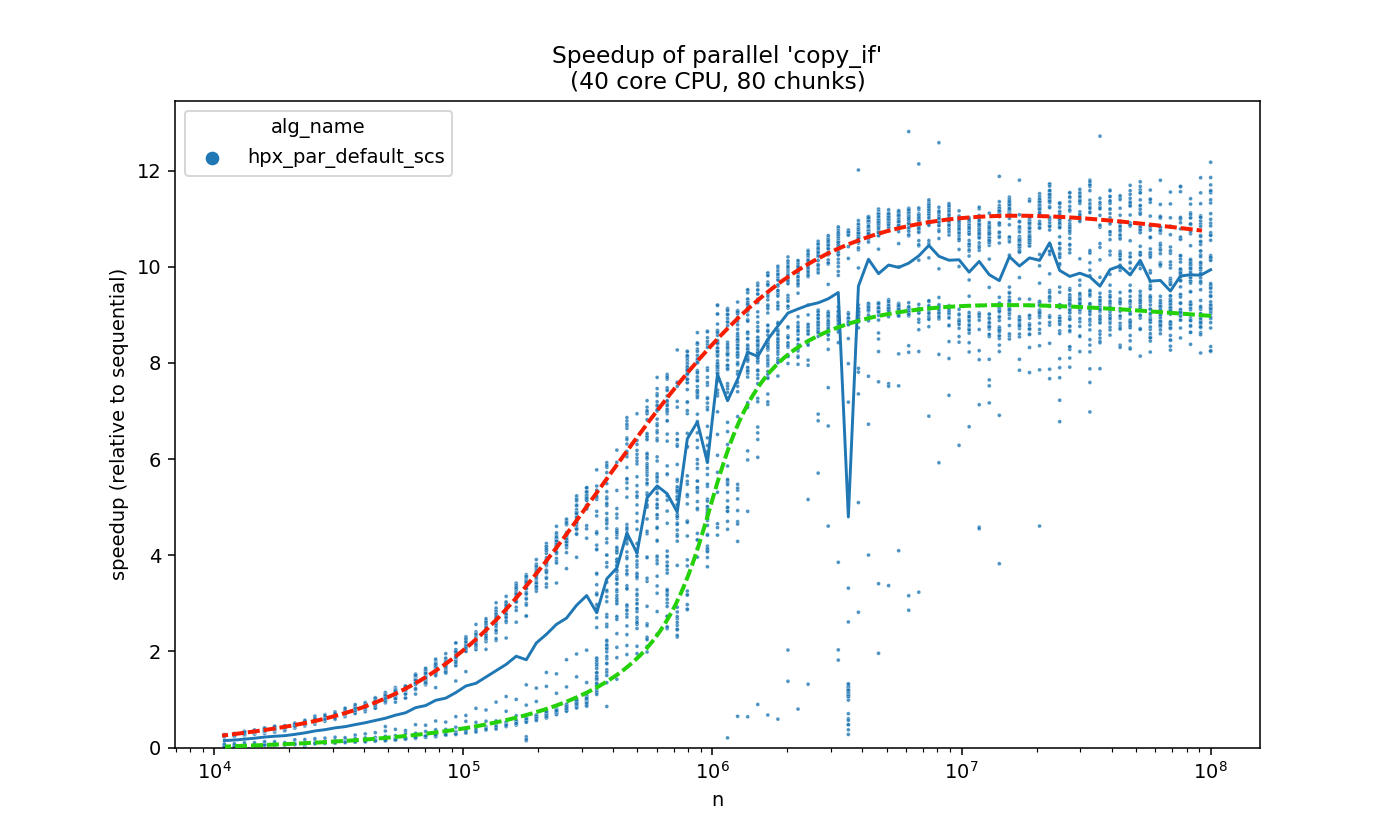 Later on, we realized that seeing the individual data points (instead of just the average-line) can be very valuable.
In the above example, notice the bi-modal distribution. Instead of being “gathered” around the average, the data points split into two seperate lines, with the average falling somewhere in between.

Also take a look at the following: 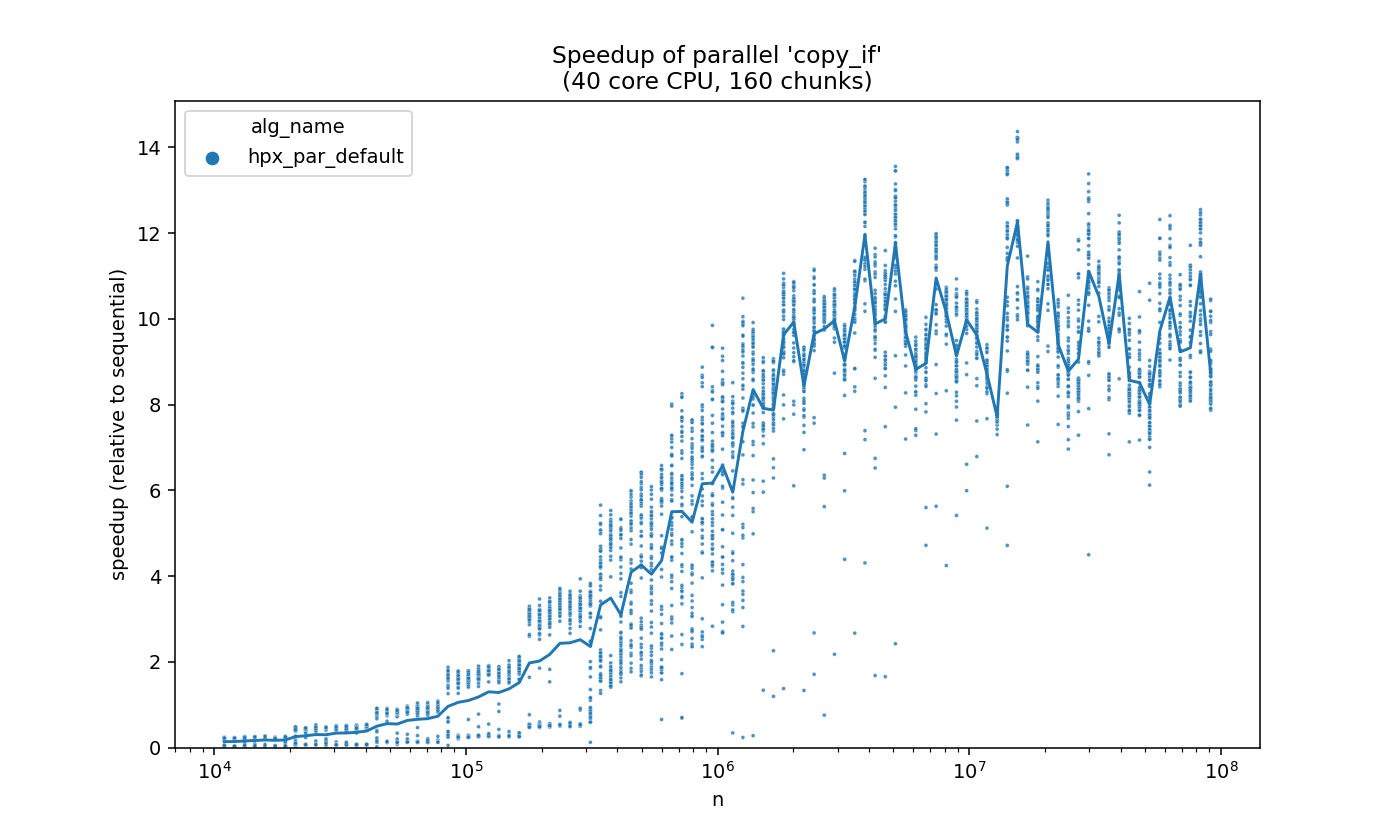 On the left-most side, we can observe a peculiar step-like pattern (which is probably caused by a quantized grain-size policy).

A lot of similar observations (expected and unexpected) were made.

Such observations would be missed if we only viewed the averaged line, and they can lead us to points of interest. Afterwards, we can examine (using debugging and profiling) what makes good runs run well, and what makes bad runs run slow.

Viewing how parallel tasks are distributed (“scheduled”) to available threads, can also be very useful for troubleshooting and improving performance. We used Intel VTune, which was already partly incorporated in HPX.

Take a look at the example below:

In the above proccess, we have two types of tasks, F1 (yellow) and F3 (green). Due to the nature of this implementation, F3 tasks have to wait for all F1 tasks to finish before starting.
That is a source of inefficiency, because the first three cores aren’t doing any useful work until the last core finishes with the last F1 task (red arrows).

We can try fixing this: 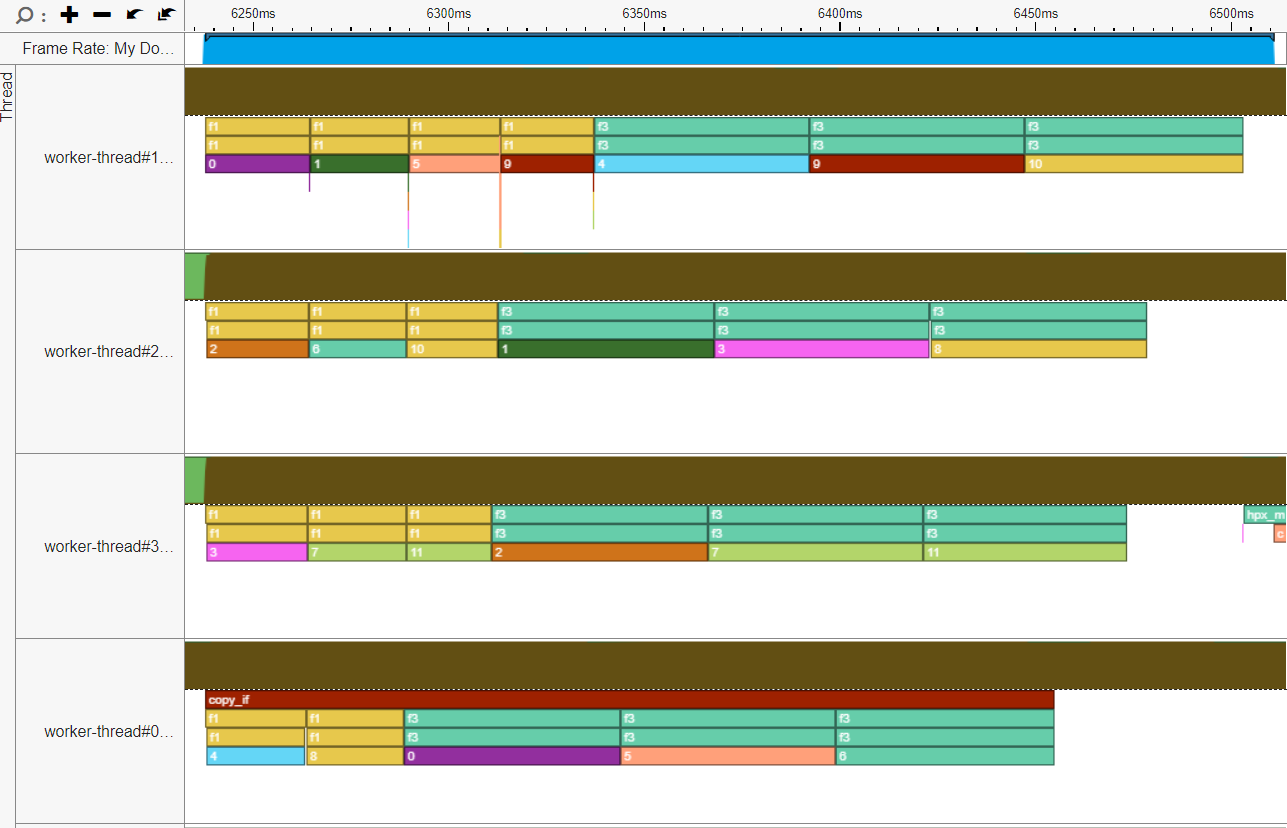 We changed the implementation, such that F3 tasks don’t have to wait for all F1 tasks. Thus, cores aren’t left starving for work.

We can also distribute the work more evenly, so that all cores finish working together: 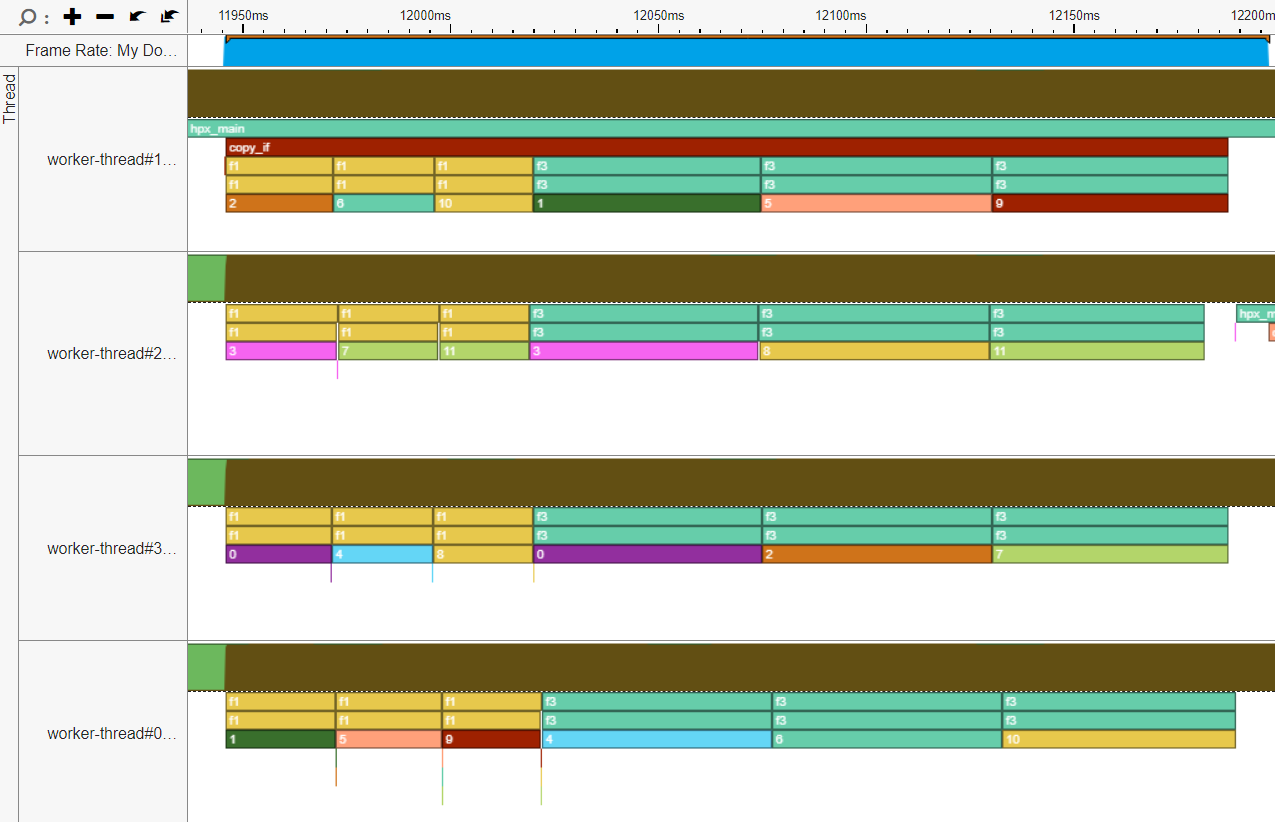 Note:
Those changes actually made the implementation run slower in some cases, because of additional overhead!
As a result, they are not included in a PR yet.

This project has lit many paths for future work to take place. Here are a few ideas: